We test TVS’ take on a cruiser motorcycle, out in the real world.

The TVS Ronin does come across as a bit of an enigma, as it doesn’t really fit into any particular category of motorcycle. It looks like a mix between a scrambler and cruiser, it seats you like an old-school roadster (think RE Classic 350) and it has a smooth, punchy urban performance on hand. While it did leave us impressed to a certain extent when we rode it the first time, we’ve now spent a few days with it to tell you what it’s really like.

For starters, the TVS Ronin looks nothing like anything out on the road today. Its design can best be described as an amalgamation of various sorts of motorcycles. The Ronin basically looks like a cruiser that’s taken design inspiration from scramblers and neo-retro motorcycles.

Up front, the Ronin features a round headlight with a T-shaped LED DRL inside, an offset, single-pod instrument cluster and a gold USD fork, which gives it good road presence. The TVS also gets a single-piece, brown-coloured seat, a chunky fuel tank, blacked-out engine casings, a large belly pan, and an all-black exhaust system with a silver-coloured tip on the end-can. At the back, it features a slim LED tail-light that looks quite neat. Other points of note are the ‘diamond cut’ alloys, slim LED indicators and neat-looking mirrors.

As for equipment, the Ronin features LED lighting all around, a fully digital instrument cluster, an optional USB charger, dual-channel ABS (top variant only) and TVS’ Smart Xonnect Bluetooth connectivity system, which offers call and message alerts, turn-by-turn navigation, and voice assistance features. It also gets two modes for the ABS – urban and rain – and an assist-and-slipper clutch. Switchgear quality is typical TVS fare, which means it’s quite good.

Suspension duties on the TVS Ronin are handled by a 41mm USD Showa fork up front and a gas-charged monoshock at the back. And although the raked front fork does bring in stability, the turning radius isn’t great, which robs you of the ability to filter through traffic to a small extent. 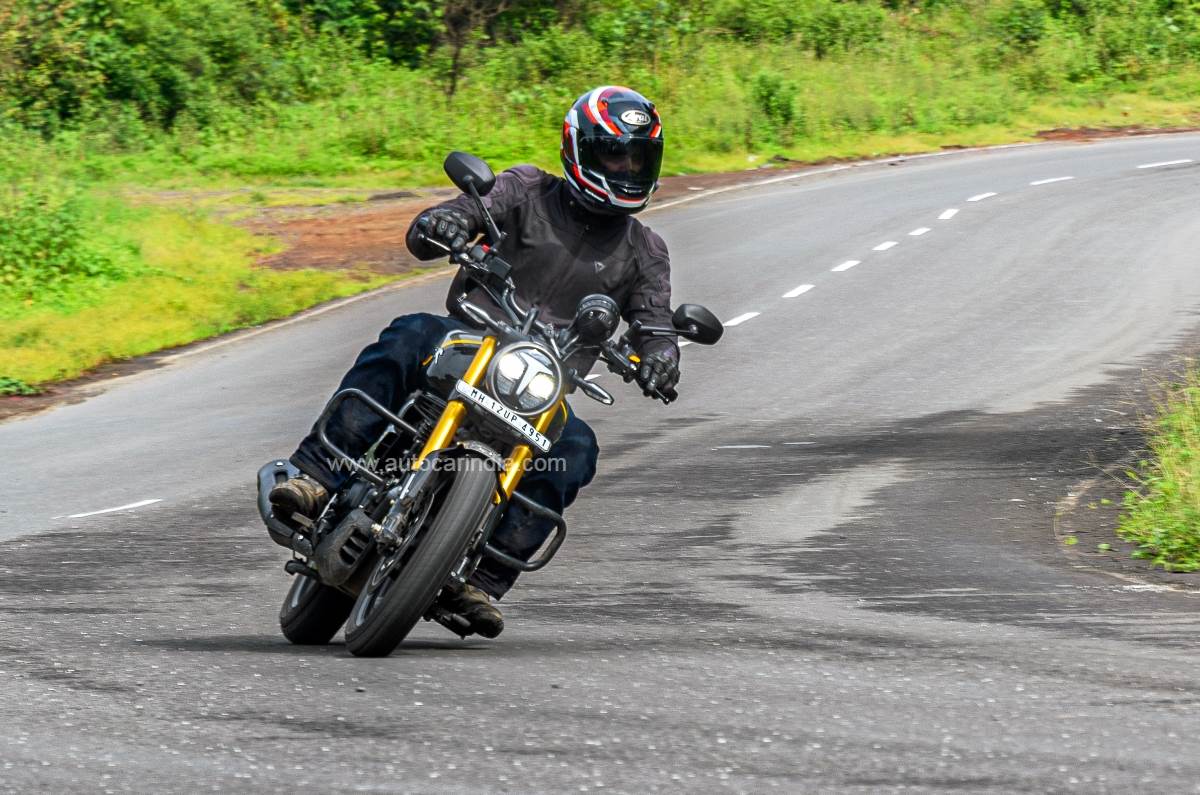 However, there’s no denying that the Ronin feels like a really comfortable motorcycle on the road. A part of this is down to the suspension itself, as it’s set on the softer side and does a great job of soaking up all the irregularities on our roads. While another part is down to how you’re seated on the motorcycle. The riding position is upright, and the handlebar is within easy reach of the rider. The relatively front-set foot pegs and the well-padded seat also contribute to this. We also had a pillion onboard briefly, who let us know that while the seat itself is comfortable, it just isn’t large enough.

In terms of handling, the Ronin takes very little effort to change direction, thanks to the light steering. In the corners, it feels quite planted and the grip on offer from the TVS Rambler tyres is adequate as well.

Powering the TVS Ronin is a 225.9cc, four-valve, single-cylinder engine that puts out 20.4hp at 7,750rpm and 19.93Nm of torque at 3,750rpm. This new engine features identical bore and stroke dimensions of 66mm, an oil cooler and drives the rear wheel via a 5-speed gearbox. In terms of pure figures, the Ronin does 0-60kph in a brisk 4.26sec, while the dash to 100kph takes 14.19sec. While these figures aren’t anything to write home about, they are good for a motorcycle of this nature. 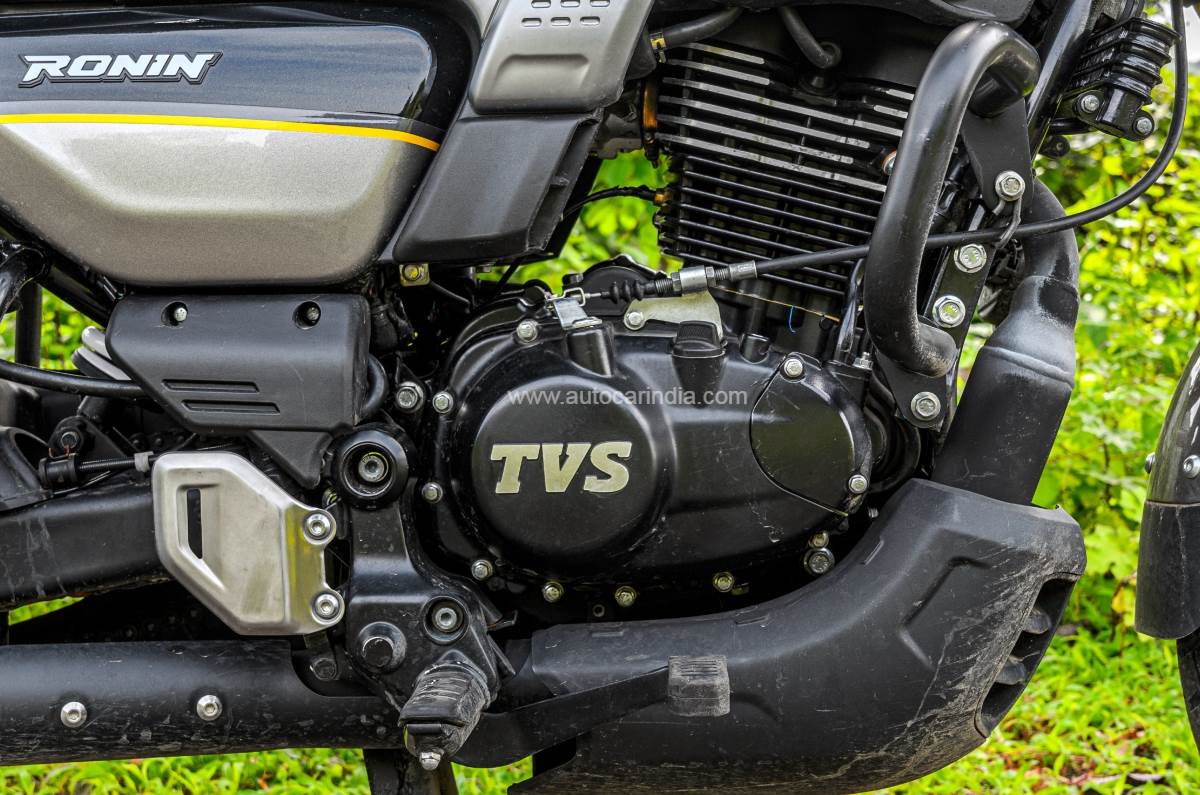 The Ronin comes equipped with a silent starter system, so all you have to do is tap the starter button once and hear the engine settle into a refined idle. The engine does have a rather deep and raspy note that gives it some character, but it otherwise feels quite smooth and TVS-like, with only a little vibration at higher revs. On the move, the engine feels very smooth and tractable, which is a boon in city conditions. The bottom-end performance is strong, enabling you to quickly move into gaps in traffic. However, out on the highway, the Ronin’s engine does tend to feel a bit stressed especially at triple-digit speeds. And this is also down to the gear ratios that TVS has employed on this motorcycle.

The gear ratios of the Ronin are quite short, which provides it with a nice low-end pull without you having to make too many gear changes. The engine manages low speeds in higher gears very well and this is reflected in its fuel efficiency figures. In the city, the Ronin managed 32.31kpl on our test cycle, which is decent for a bike of its capacity. However, the short gearing means that the engine spins at higher RPMS at higher speeds. This takes a toll on highway efficiency, which we tested out to be 36.62kpl. While the figure isn’t poor, it isn’t exactly impressive either.

Priced from Rs 1.49 lakh-1.69 lakh, the TVS Ronin can be quite appealing, especially considering the features it offers. However, it is also priced quite close to other 250cc motorcycles that offer more performance. And of course, the new Royal Enfield Hunter is priced at almost exactly the same point, and that bike comes with a bigger 350cc engine.

While it is hard to define what exactly the Ronin is, it can perhaps be best described as an easy-going, well-equipped urban-biased motorcycle. It could make for an ideal step up for someone coming from a mundane commuter who wants good performance, modern retro looks and a nice, comfy bike to ride.

SEOUL, South Korea — A minimum of 59 individuals have been killed and 150 extra have been injured after being crushed by a big crowd […]